We Hold These Truths To Be Self-Evident…

There are a number of striking features of the American healthcare system compared with those of other developed countries: the huge percentage of our GDP that goes to health (currently at 17.9%); the enormous gap between our spending and health outcomes (i.e., the apparent lack of value); and the tremendous health disparities in this country compared with others.  We have recognized these disparities as a particular problem in Milwaukee, and one of our strategic priorities is to address those disparities in our community.

Our approach has been essentially two-pronged.  We are addressing access to care in a variety of ways, including directly providing medical and dental services in underserved communities (e.g., Next Door Foundation), providing school nurses, and a CMMI-funded initiative to provide community health navigators and other wrap-around services.  We are also working with community partners to address risk factors for poor health outcomes as varied as obesity, bullying, and unsafe sleep practices.

Increasingly, though, there is evidence, as summarized in a recent Robert Wood Johnson Foundation report that health disparities are not the result only of differential health care access among the poor, but of poverty and racial bias themselves.  There are several lines of inquiry.  One is the role of environment (and specifically prenatal exposures) on epigenetic effects.  Adverse effects believed to be related to epigenetic changes that are more prevalent among infants of poor women include obesity and psychiatric, behavioral, and learning problems.  Another is the role of “toxic stress,” which is the result of repeated, unmitigated stress responses in infancy and early childhood – stresses that may result from both conditions of poverty or racial discrimination – leading to long-lasting effects on physical and mental health.  The AAP has identified both of these as strategic focus areas.

Even more intriguing is evidence that while poverty may be a contributing factor, the level of income inequality is more important than the absolute amount of poverty.  In other words, while poverty does lead to less health care access, less health care utilization, and more exposure to risk factors, these factors combined account for only a portion of the observed disparities.  Indeed, higher degrees of income inequality appear to predict worse health among not only the poor, but among the wealthy.  At least part of this seems to be related to the fact that when there are big gaps between the rich and the poor, the very phenomenon of feeling poor contributes to the toxic stress.  At the same time, the wealthy tend to be more resistant to public expenditures that benefit poor and rich alike.

If this is even partly true, it suggests that addressing health disparities will require addressing income disparities.  Talk about a Herculean effort! We’ve always recognized that we cannot solve the problem of health disparities alone, which is why we have partnered so broadly in that effort.  But how can any organization, or even a coalition, hope to make a dent in the basic American economy and culture?

That’s why I found this article on newborn care in Finland so intriguing.  It suggests that small efforts to level the field can matter.  Basically, all new mothers in Finland receive a maternity package.  Unlike in the US, where kits may be given out by hospitals but vary widely, it’s the same for all Finnish moms.  The kit comes in a box and includes breast feeding information, along with bodysuits, a sleeping bag, outdoor gear, diapers, bathing products for the baby, as well as bedding and a small mattress – the mattress is designed to go into the box, which serves as a crib!  And the culture is such that everyone uses it.  Mothers have a choice between the kit and a 140 euro cash grant; 95% choose the kit.  Imagine how things might be different if all babies in the Milwaukee area, whether they live in Lindsay Heights or Whitefish Bay, napped in the same type of box.  Of course, that would require a cultural change that could be even harder to achieve than income redistribution.  The Finns note that part of the appeal of the maternity kit is the fact that it symbolizes equality.  But when it comes to children, there is a strain of American culture that supports that: for example, the traditional commitment to universal public education dating back to the first years of the Republic.

Our health disparities are a daunting problem.  Could the answer lie in a box? 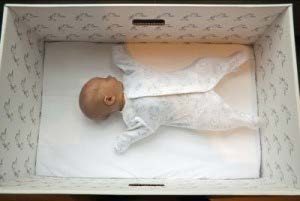 This entry was posted on Monday, June 24th, 2013 at 4:59 pm and is filed under Uncategorized. You can follow any responses to this entry through the RSS 2.0 feed. You can leave a response, or trackback from your own site.

One Response to We Hold These Truths To Be Self-Evident…